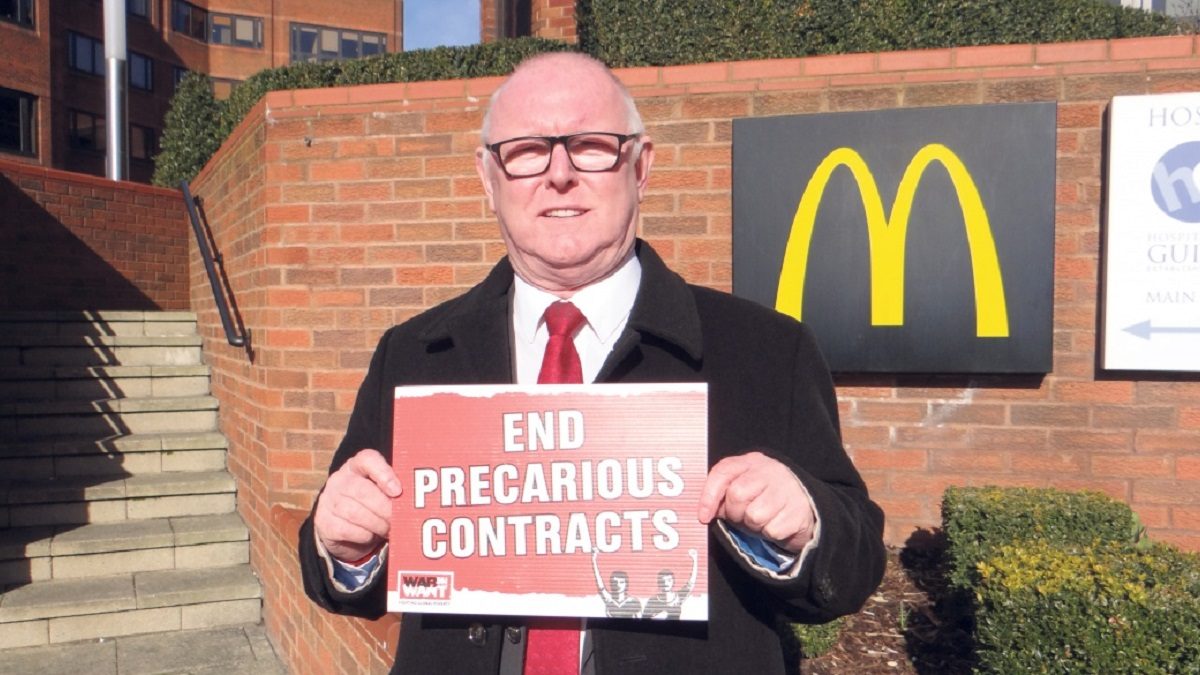 RONNIE DRAPER, general secretary of the BFAWU, explains that fighting for fast food workers has become an issue of fundamental human rights

WELCOME to Congress everyone. It is great to be among fellow trade unionists at what will be my final conference as BFAWU general secretary. I’m very proud to have served my union at the TUC and enjoyed bringing some groundbreaking motions to the table around a £10 an hour minimum wage and environmental issues.

But today I want to talk about human rights.

Human rights are at the fundamental basis of what trade unions do. The trade union movement has historically been the strongest form of organisation able to advocate and if necessary, forcefully implement and defend human rights.

We only have the rights that we can enforce ourselves — and to be able to enforce those rights we must be organised.

Everything that has ever been won by workers was won because workers organised, and thus made themselves powerful enough to demand better.

McDonald’s is attempting to deny our members the right to form a union.

It denies our members the right to form a union by refusing our organisers and members access to workplaces to speak with workers.

In a recent incident one of our organisers was assaulted by a business manager. For what? For talking to a worker about her human right to form a trade union.

However, McDonald’s will fail. It will fail to stop the workers from forming their union. It will fail because my union, our movement, and the workers themselves won’t put up with it. They are fighting and winning and will continue to do so.

Workers have already won a 6.7 per cent pay rise and a limited amount of guaranteed hours. They have sacked bullying and sexually abusive managers.

And they won’t stop there. Workers are demanding more.
I am pleased to announce that our executive council has called for a London living wage of £15 an hour, which reflects the aspirations of our members in London. We will fight to win a movement with £15 as a target for us to organise around in the coming period.

What the last few years organising precarious, low-wage McDonald’s workers has taught me is this: our laws in terms of union access to workplaces are stacked heavily in favour of the employer.

We have no right to go into a workplace, organise and represent our members, and workers have no right to speak to each other and form unions. Workers are often bullied, intimidated and isolated for even mentioning the word union. This is a human rights issue: why should free speech end when you clock on?

This shows how scared McDonald’s is of its own workers — and they are right to be scared — because when workers organise, they have the power to achieve anything.

We need legislation that looks at allowing unions access to workplaces, like in New Zealand, where with a little notice the union is able to go to the fast-food restaurant, the call centre, and the factory and talk to workers.

In New Zealand the employer has to treat the union rep with respect, ensure there is a private space to sit down and talk, and managers are not allowed to intimidate and bully workers for talking to the union. The union is accepted as normal and a part of everyday life at work. We need legislation like this in Britain.

I am pleased to say we, along with other unions, have been working on such legislation with the brilliant Laura Pidcock and her team at the shadow ministry of labour.

In this, the TUC year of the young worker, when the trade union movement looks at itself and says “we are too old,” we need to understand that rebuilding our movement means going to workers in their workplaces and communities, listening to their issues and explaining why our movement is relevant to them, proving in practice that there is strength in our unity, by winning.

Access legislation alongside real organising will transform our movement. If the TUC and the Labour Party can do anything for those workers facing the worst conditions it is this: give unions access to unorganised sites and give workers free speech at work — by law.

If we take this opportunity to do that, then our fellow workers will give us a better world.