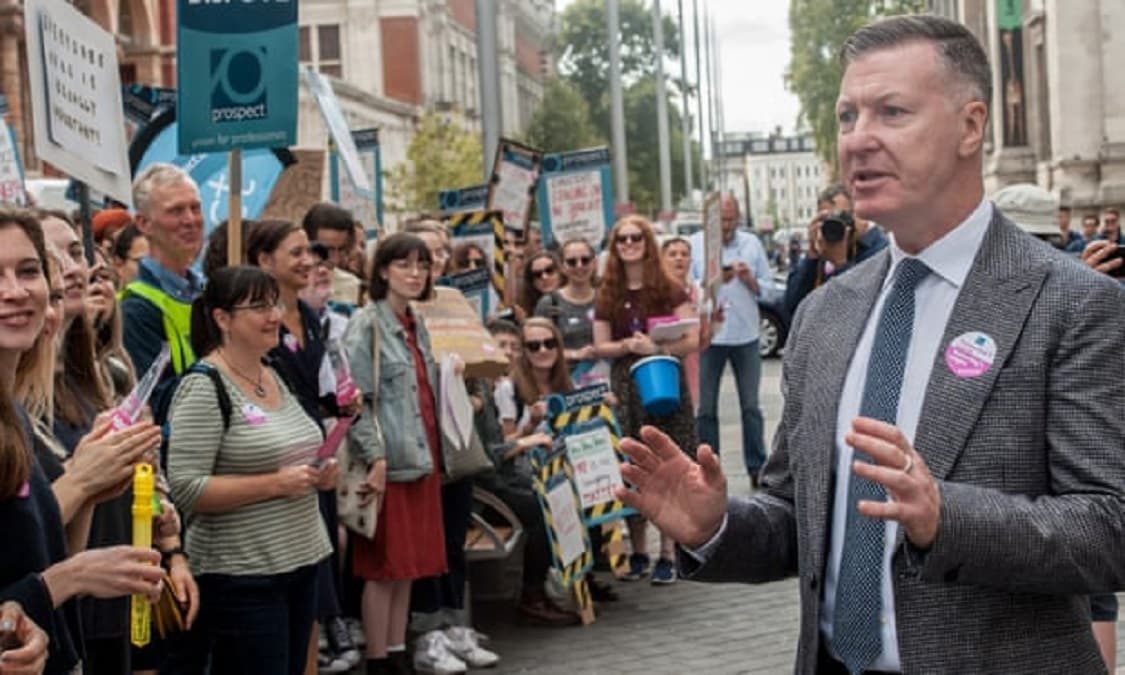 Staff at Science Museum sites across England have begun a 24-hour strike in protest over low pay.

The action comes after the group’s directors refused to increase a below inflation 1.5% pay rise offered to more than 75% of staff this year.

On Friday, hundreds of workers picketed outside museums in London, Manchester, Bradford, York and Wiltshire. Laurel Mackie, 42, an explainer who helps to put on shows and demonstrations at the Science Museum in south Kensington, joined the protest with her son Albert, seven.

Science Museum under pressure to shun big oil sponsorship
Read more
She said she earned less than the London living wage and found the cost of childcare a “struggle”.

“Travel is expensive too,” she said. “I have to think about what time of day I travel which can be a bit of a rush when you’re with a child.”

Mackie said she loved her job but wanted the Science Museum to pay staff a real living wage, similar to the nearby Natural History and Victoria and Albert museums in south-west London.

She said the museums were important. “In this age, where truth is crucial, it’s important to know what is fact and what isn’t. Critical thinking really is critical,” she said. “Bringing children and adolescents here can introduce them to that.”

Prospect, the union representing striking Science Museum Group (SMG) staff, said a series a of below-inflation pay rises had left workers with a 13% real-terms pay cut since 2010. They also pointed out that the average salary among those picketing in London today was £23,000 – a rise of 1.6% between 2014 and 2018 – while the SMG director, Ian Blatchford, a bonus of between £20,000 and £25,000 last year.

Carlos Alvares, 54, an explainer who has worked at the London museum for 20 years, suggested public institutions should be held to higher standards over fair pay. “We are here to entertain and educate as well as facilitate the understanding of science to the public,” he said.

Alvares added that he was “barely making enough to break even” and struggling to pay for travel from his home near Heathrow.

Outside the Science and Industry Museum in Manchester, striking staff waved signs punning on the museum’s exhibits. “Fair pay – it’s not rocket science” read one, a reference to Stephenson’s Rocket, built to run on the Liverpool and Manchester railway, the world’s first intercity passenger line.

Front-of-house staff at the museum earned £8.70 an hour, 30p less than the real national living wage, the strikers said.

Maxwell Hamilton, the academic programme leader, earns more but said he was striking in solidarity with colleagues. “Ordinary SMG employees have had an effective 13% pay cut over the last four years,” he said.

Steve Roberts, a negotiations officer at Prospect, said SMG had made a surplus of £4m and could afford to pay staff more. He said members of the public were “surprised that dedicated staff are not getting a decent standard of pay”.

Victor Durban, who was visiting the museum with his wife, Marian, and four-year-old grandson, Joseph, said he supported the strike. “What’s disgusting is the salary the director is getting and the yearly bonuses too. You don’t think about these things. The biggest problem is that they can’t charge entry.”

However, museum staff said they wanted entry to remain free. “We want everybody to be able to come in and enjoy the museum,” Hamilton said.

Prospect’s general secretary, Mike Clancy, said: “The Science Museum Group has some of the highest-profile museums in the country. As beacons of human progress it is ludicrous that they don’t pay all their workers enough to live on.

“Our members in SMG love their jobs but they cannot carry on with year after year of real terms pay cuts and that is why they felt they had no option but to strike.”

An SMG spokesperson said: “Our pay offer included a 6.9% increase for the lowest paid employees as part of a settlement that saw all employees receive an increase of at least 1.5%. Overall the settlement represents a 2.7% increase in salary costs, which we believe was a reasonable offer, given the challenging overall financial picture.”

More people in India…
… like you, are reading and supporting The Guardian’s independent, investigative journalism than ever before. And unlike many new organisations, we have chosen an approach that allows us to keep our journalism accessible to all, regardless of where they live or what they can afford. But we need your ongoing support to keep working as we do.

The Guardian will engage with the most critical issues of our time – from the escalating climate catastrophe to widespread inequality to the influence of big tech on our lives. At a time when factual information is a necessity, we believe that each of us, around the world, deserves access to accurate reporting with integrity at its heart.

Our editorial independence means we set our own agenda and voice our own opinions. Guardian journalism is free from commercial and political bias and not influenced by billionaire owners or shareholders. This means we can give a voice to those less heard, explore where others turn away, and rigorously challenge those in power.

We need your support to keep delivering quality journalism, to maintain our openness and to protect our precious independence. Every reader contribution, big or small, is so valuable. Support The Guardian from as little as $1 – and it only takes a minute. Thank you.