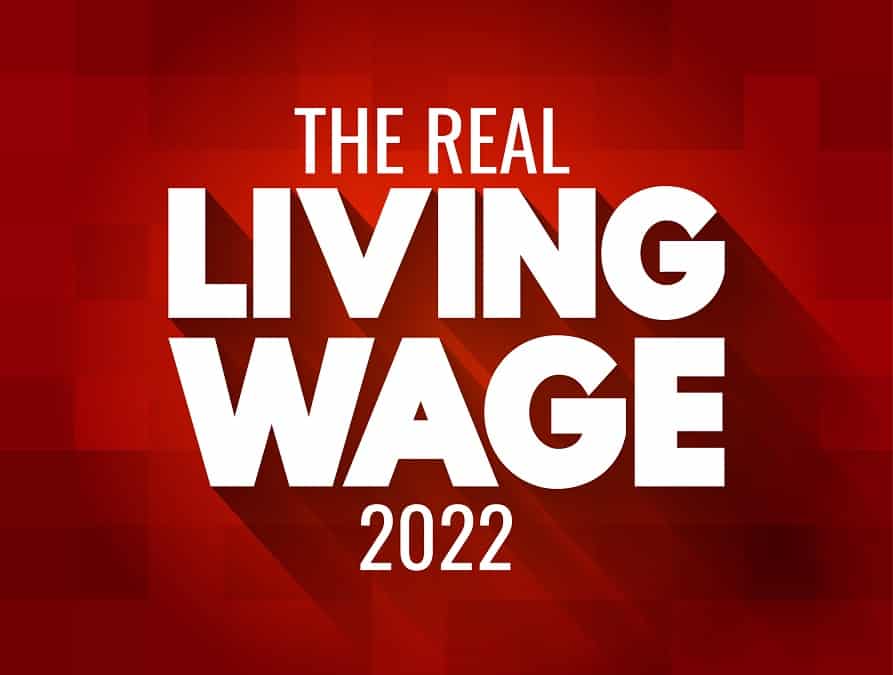 The Workers Union has asked: ‘What’s the real living wage in 2022?’

Back in October 2021, the government announced that the National Living Wage – the minimum amount that a worker over 23 must be paid per hour – will rise in April this year.  The change will see workers’ pay increase from £8.91 to £9.50.

Speaking about the rises after the autumn budget, the Chancellor of the Exchequer, Rishi Sunak said: ‘This is a Government that is on the side of working people.

‘This wage boost ensures we’re making work pay and keeps us on track to meet our target to end low pay by the end of this Parliament.’

However, despite the commendable efforts of politicians to legislate for a minimum standard of income, many commentators believe that the current rate of inflation will stymie the effects of the rise.

Recent data released by the Office of National Statistics (ONS), reveal that despite rising wages in the three months up until November, many people did not feel the benefit because of a steep rise in prices. Wages subsequently fell by 1 percent in November, while the rate of inflation rose by 5 percent. This rise is set to continue, with the Bank of England predicting it could go as high as 6 percent by Spring.

In response, the Resolution Foundation’s senior economist, Hannah Slaughter, said: ‘Despite widespread talk of returning wage spirals, Britain is instead experiencing the return of shrinking pay packets. The latest period of falling real wages – the third in a decade – is likely to have started as a far back as last Summer, and is likely to continue beyond next Summer too.

So much is at stake in 2022, that the last thing we need is a “summer of discontent” to offset all the good work that’s been done to catapult this country out of the pandemic doldrums.

While there is, understandably, concern about strained supply chains and energy prices, there must, equally, be concern about the people who are most likely to be victims of their fluctuations. That includes those who are on low wages, or who work part-time or who are simply overwhelmed by their financial obligations.

Let us be clear: workers in this situation are often the same people who toiled in care homes during the worst of the pandemic or performed other vitally important public services to keep the country going.
They did not abandon us when we needed them, so we should not cut the ropes and run now they need us.

So, we are asking what makes a genuine living wage in 2022. The companies that sign up to The Living Wage Foundation’s voluntary agreement will pay £9.90 in the country and £11.05 an hour in London – but is even this enough in the circumstances?

Out there beyond the chattering and static of politics and media, there is a figure that will put steam on the table for working families and provide a reasonable standard of living while inflation bites. As a nation we need to agree on what this is as a matter of urgency.